Before reading this blog post, I suggest you revisit an earlier piece I wrote about Rep. Tulsi Gabbard and her experiences in Syria and beyond. I wrote it almost exactly one year ago, and it proves all the more relevant now. You can read it here.

Now for the reason you’re here.

Between the evening and morning of 13-14 April 2018, while most of Europe and the Middle East slept, the United States and European allies launched a series of airstrikes against the Syrian Arab Republic, targeting various locations in Damascus. Below is a visual. Meet Anne-Marie Slaughter. Surname irony aside, Ms. Slaughter was the first woman to serve as the Director of Policy Planning for the U.S. State Department between 2009-11, serving under then-Secretary of State Hillary Clinton under the Obama Administration. She is a registered Democrat, though that might have already been obvious given her service. You can learn more about her here. 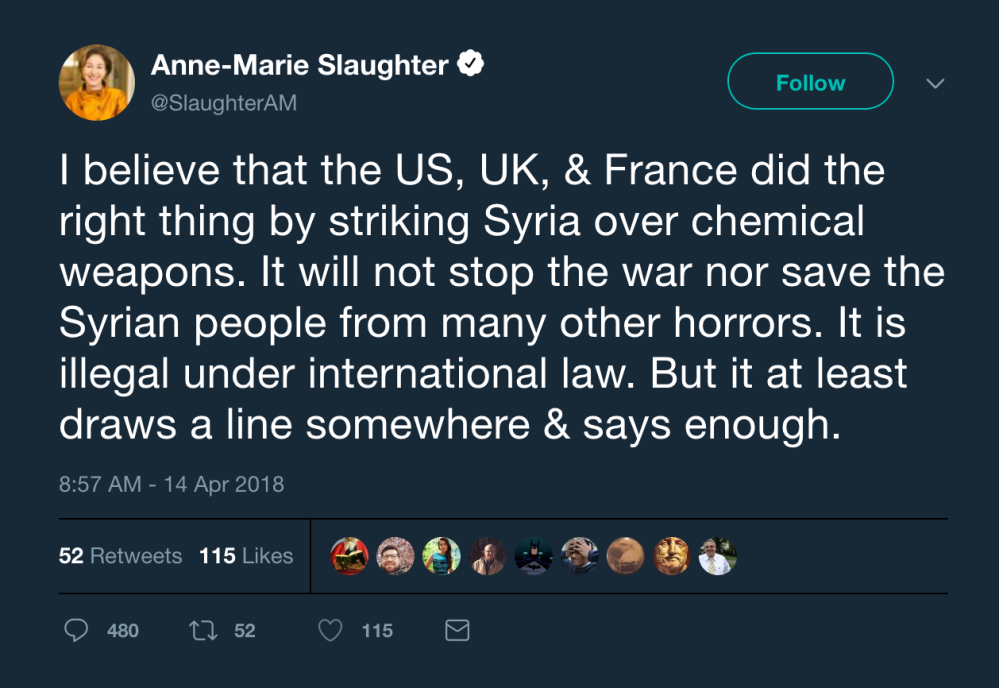 Let’s talk about this tweet, posted earlier this morning. As this tweet appears, apparently the logic here is that bombing a sovereign nation is how we say that’s enough to alleged despicable acts, even though it, as Ms. Slaughter states, “won’t stop the war nor save the Syrian people from many other horrors.” I was amazed to see this. Ms. Slaughter admitted the illegality of the airstrike, but still believed it was the right thing to do.

This illegal military action has accomplished absolutely nothing besides needless barbarism. Innocent Syrians have already died in similar recent airstrikes, and still-unconfirmed reports suggest that up to four more innocent Syrian civilians died in the bombings last night, meaning that once again, an American bombing in a foreign land resulted in the avoidable deaths of innocents.

There is no coherent justification for this airstrike. We’ve seen this story before. The American government claims it has proof that Syrian president Bashar al-Assad carried out a chemical attack against the Syrian people last week. This is the same American government that now has John Bolton working for it. Upon understanding this, I have no reason to believe anything this administration says.

History tells us that the American government has lied time and time again in order to justify its military actions in foreign lands, further embroiling those lands in conflict and destabilizing their societies. American foreign policy preaches a gospel that claims to seek truth and justice throughout the world, but its fallibility becomes apparent when the lives of Palestinians, Haïtians, Yemeni, Ethiopians, and many other brown and black people around the world come into play.

When the lives of these oppressed peoples come into play, we fall completely silent, as such acts completely contradict our foreign policy (meaning business) interests. We citizens have no reason to be confident in any of these foreign excursions taking place beyond our borders, and American imperialism as we know it continues to grow.

Think of the persecution and sterilization of Ethiopian Jews and African migrants facing deportation in Israel, Haïtian earthquake survivors being exposed by the United Nations to cholera and raped by peacekeepers, the Yemeni humanitarian crisis, or the Rohingya refugee crisis in South Asia.

There’s a common theme among all of these tragedies.

It’s a very simple question to ask, really. If another country like Mexico, Canada, Russia, or even Brasil, furious with the way the United States stands idly by while black and brown lives are forfeit at the hands of police weaponry, decided to launch missiles into populated cities like Los Angeles, New York, Seattle, Miami, or Dallas, how would we be expected to respond? I know, you already have an answer in your head.

I assure you, reader, that we Americans would be furious at the arrogance and audacity of another nation to meddle in our domestic affairs. We would be ready to take up arms in order to combat this grievous violation of our sovereignty. On many occasions, we have acted as such. Just ask the Japanese and the British.

Before I continue, let me be clear on something: the acts being committed against civilians are both disgusting and horrific, both here and in Syria. There is no question or debate to be had regarding this. In a world where soundbite quotes and gotcha moments rule the day, let there be no misunderstanding concerning these matters.

But we’ve heard this same drumbeat of war before from previous right-wing governments, most notably the Bush Administration. [With that said, do not confuse this statement as an excusal of the Clinton and Obama administrations, as they too have engaged in questionable foreign actions, with Kosovo and Libya coming to mind].

Here we are again, claiming a foreign country committed an illegal act against its own people, and within weeks of consulting with Saudi Arabian diplomats, missiles and bombs rain down from the heavens into the foreign country in question. This is the same blueprint as the failed Iraq War that resulted in the Daesh we now know as an enemy.

I am already deeply concerned that in the years to come, we will discover that what took place just last night was little more than a political ploy to reverse or improve declining presidential job approval ratings, a ploy used to turn the public eye towards warfare. “Perhaps this will grant me the political boost I so desperately need,” the fascist ponders.

I fear that this claim of chemical attacks by President Assad against his people is false, and we are escalating this conflict due to an unknown [to the public] interest pulling the strings.  Not even the United Nations (the same United Nations that didn’t believe former Iraqi president Saddam Hussein had weapons of mass destruction justifying the American invasion) is completely sure who launched this chemical attack in Syria. We just don’t know who gave the order right now. 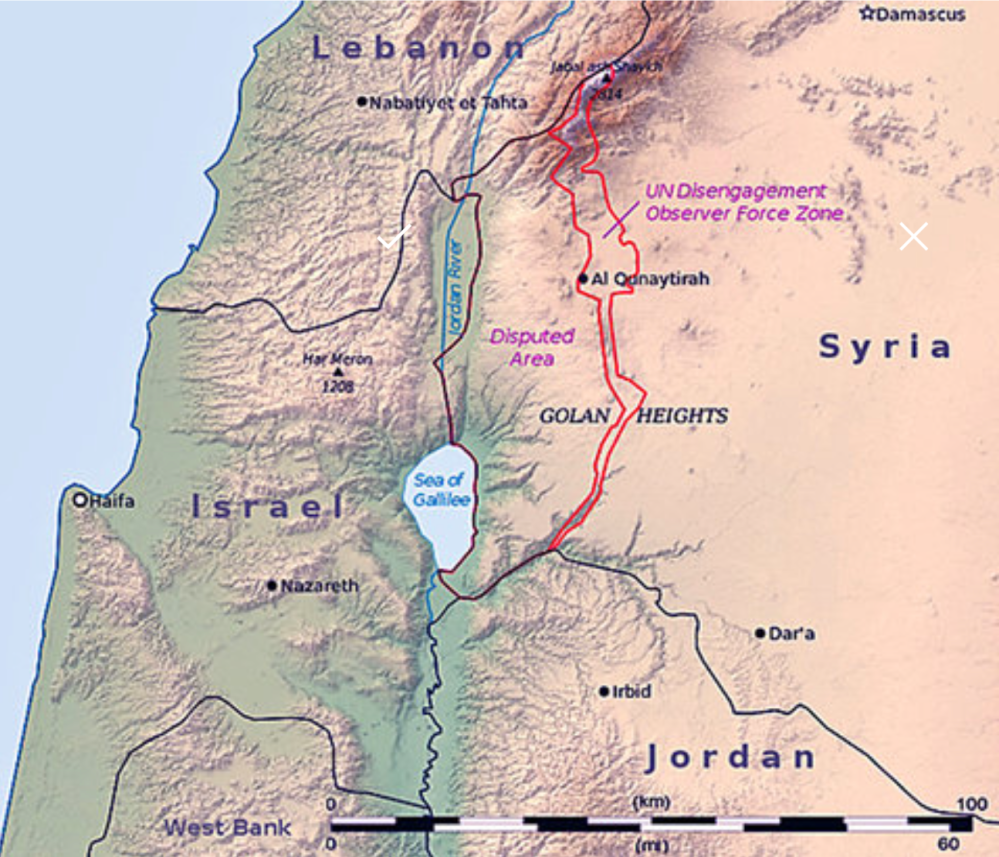 There are some questions here that need to be answered.

Could it be that we are escalating conflict in Syria in order to provide former Vice President Dick Cheney a means by which he can further his business interests? Remember Cheney’s relationship with Halliburton and its relation to the Iraq War?

Is it not peculiar that these acts are being taken the same week the White House issued a pardon to Scooter Libby, Dick Cheney’s former Chief of Staff and a man the White House itself has said it doesn’t know personally? [Scooter Libby, by the way, was convicted for committing perjury before a federal grand jury in 2007, in relation to the Plame Affair].

Not familiar with the Rothschild Family? Learn about them here.

Is it a coincidence that this same Genie Energy Limited was granted the first oil drilling license in the Israeli-occupied Golan Heights region of southern Syria, annexed and illegally controlled by Israel since 1981? Probably not. These days, it’s far too blatant for the world to continue to turn a blind eye. Those days are long dead. American foreign policy has long since acquiesced to the will of the world’s capitalist elites seeking to profit on lives of color.

Just ask the Persian people between the 1950s and 70s.

This is a desire and business practice that extends far beyond conventional borders. I fear that the Saudis will continue to stand idly by, watching this escalation with glee, perhaps knowing that they can capitalize in time. After all, it is no secret that the Saudis have no problem taking advantage of a destabilized Levantine Region and using their oil wealth to further indoctrinate the land with their Wahhabi brand of Islam. This has been happening for decades.

Why do we continue to pander to the Saudis when they oppress Saudi women, slaughter LGBT citizens, torment the Yemeni people, and stand idly by while the Muslim and Arab worlds around them crumble under Daesh’s rampage? Were this another land such as Iraq or a Russia-free Cuba, we’d have invaded and crippled them decades ago.

How does the Arabian Peninsula continue to swim in untold excesses while both Arabs and Muslims throughout the region continue to starve and inch closer to radicalization, the likes of which is naturally borne out of class oppression and extreme poverty? Why do we stand by and accept this?

Why do we allow these injustices to persist throughout the Levantine world, only to turn around and commit acts of destabilization throughout whole sub-regions? It is clear now, more than ever, that the world is watching (and affected by) our actions.

Our votes have consequences.

Someday soon, a time will come when the smoke will clear, oppression (as we now know it) will be defeated in those lands, and the Arab/Muslim worlds will be left to govern themselves in spirit, truth, and peace. The United States and Europe must withdraw their imperial influence from these lands, and the continued economic injustices we’ve seen must cease.

Haïti will someday see an end to western economic oppression and white supremacy. West Papua will someday be free from Indonesian oppression. The African continent, with all of its beautiful and diverse nations, tribes, and lands, will more resemble the Kingdom of Wakanda than a Sarah McLachlan commercial in western eyes.

Here’s Luanda, Angola as an example. 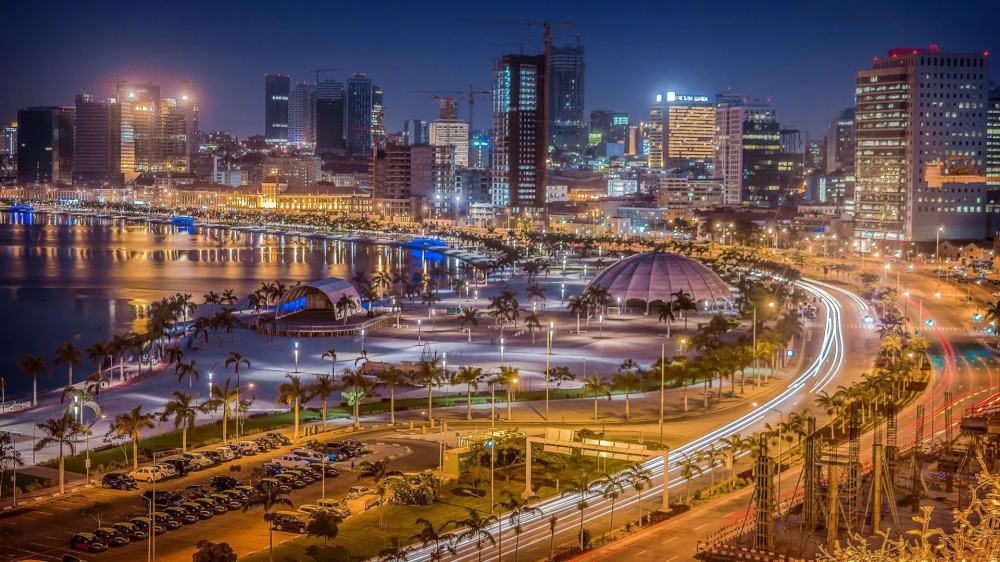 It is imperative that in all matters of foreign conflicts, we must strive to exhaust any and all diplomatic resources before even considering the use of armed aggression against a sovereign nation as an option.

Diplomacy deserves a real chance in this world.

What happened Friday night/Saturday morning was a crime against international law, and the United States cannot continue to violate the law in order to satiate its capitalist interests within the defense and oil industries.

We do not know for sure if the U.S. government’s justification for the attacks—the belief that President Assad was the individual responsible for the recent chemical attacks within the country—is provable beyond a reasonable doubt. The United Nations still does not know who is responsible. We acted rashly and irresponsibly, at human cost. This cannot continue to be the United States’ brand of foreign policy.

Someday, justice will be served to those that truthfully seek it. In the meantime, however, we must keep a watchful eye, resist, revolt, and maintain our civic power. We have this power in our hands, and it remains upon us to exercise it responsibly. We must vote, engage in direct action, and educate our neighbors on the affairs of the world. Together, we can do this, and it can start with you, the reader.

Peace is possible, and a better world is necessary.

Want others to know about this article? Here are some options:

Born in Brooklyn and raised in Boca Raton, Ricky J. Marc (@RickyJMarc) is an alumnus of the Obama White House and Cornell Paris Institute, a former Legislative Aide with both the Florida House of Representatives and Florida Senate, and a graduate of St. Thomas University with a Juris Doctor and Master of Science in Sports Administration.
%d bloggers like this: